Now please do not expect such an enthusiastic report of Thailand as it was for Cambodia. Thailand did not impress anything onto me, other than disdain for the ‘Land of a Thousand Smiles’.

On the Thursday we drove from Siem Reap to the Cambodia-Thai border, which we crossed. The day was perhaps the hottest day I experienced in Southeast Asia, so it wasn’t all that nice!

The border was busier than I thought it would be. It was filthier too, I was expecting it to be more stately, or to have an element of grandeur, it had neither!

Once we crossed the border we met with our Thai Guide, who was very welcoming, but seemingly false.

We travelled to luncheon where it turned out we had to pay for our water; something that in Cambodia was free (for us at least). Ironically I didn’t order a water, I got coffee, which was free with the free meal.

Now Thai food has a reputation for being spicy, but nothing compares to what many of us experienced at this restaurant. Ning, Kareem, Maggie, Ngiam, and I all participated in a game where we had to guess what number another person was thinking; the person who guessed had to eat a chilli. Peoples reactions were highly comical! As I didn’t guess a number I still tried one…O.M.F.G. THE BURN! My mouth burnt for 20 minutes straight! And the more I breathed the worse it got! Never again! We checked into an OK hotel (Nothing like Lin Ratanak).

The following day we had a lecture at Kohn Kaen university, and I eventually fell asleep as it was just so dull. (I hadn’t yet recovered from Bayon…that’s my excuse…) We then had lunch and went on to do the best thing of my time in Thailand.

First off we visited a school at the Ban Don Han village where a large number of people played football with the young children of the school. (I took lots of photos instead!). 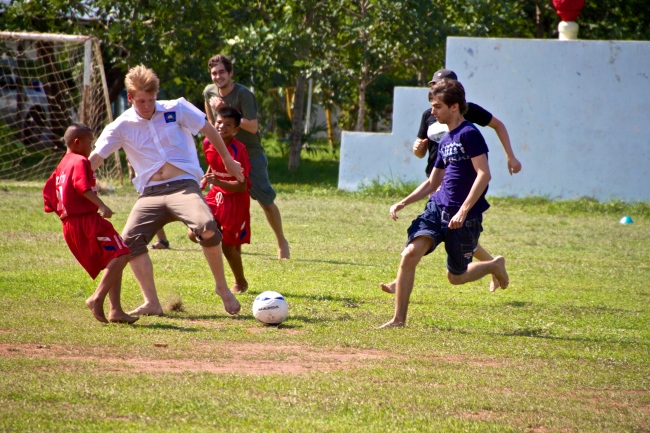 Others played community games and volleyball. The children were so lovely and were all bundles of joy! Communicating was rather difficult but it wasn’t impossible!

It was here that I met Emmi, a wonderful girl who had studied English at University and was working in the Village school.

We then onto the activity I was dreading most, but turned out to be the best part of our Thai trip. Rice Planting! It doesn’t need much description, we had bundles of rice plants, took our shoes and socks off, got down and dirty knee deep in mud into the paddy and planted rice in the entire field. It was so much fun! 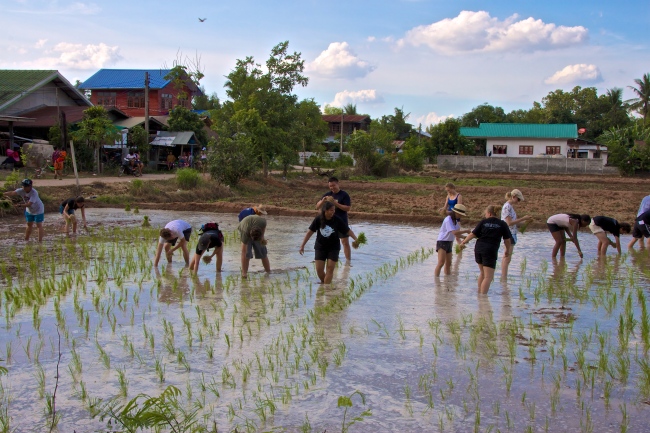 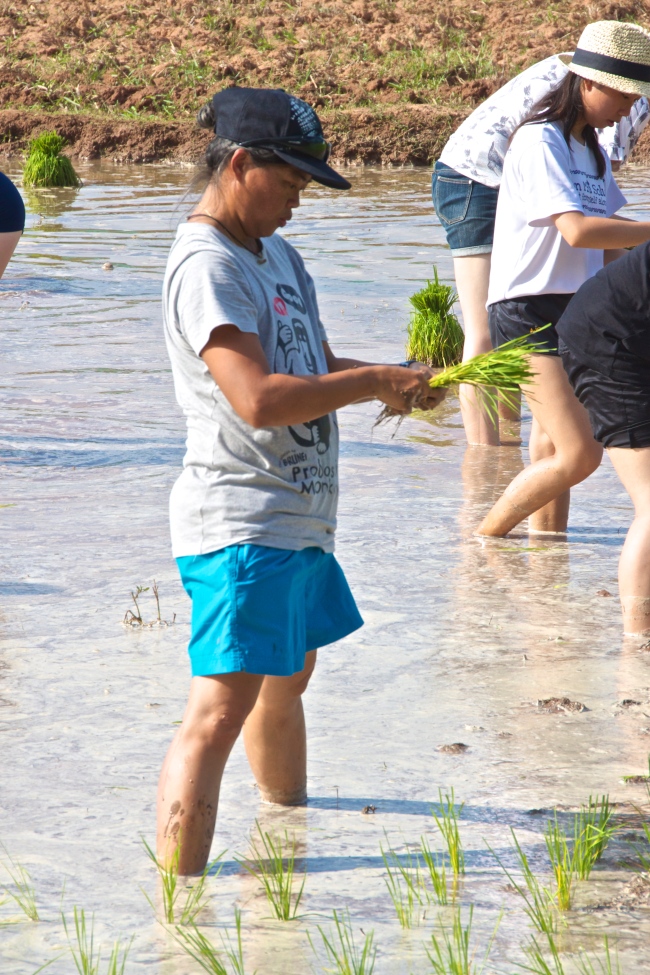 We then travelled back for dinner, then went to bed!

The following morning we set off to Ayutthaya to visit, wait for it…TEMPLES! The joy. We then visited the Thai Studies Museum at Suranaree University where we learnt more about village life. There we let our our childish sides loose and played with the variety of pre-electronic toys that appear to be similar all over the world, such as spinning tops. 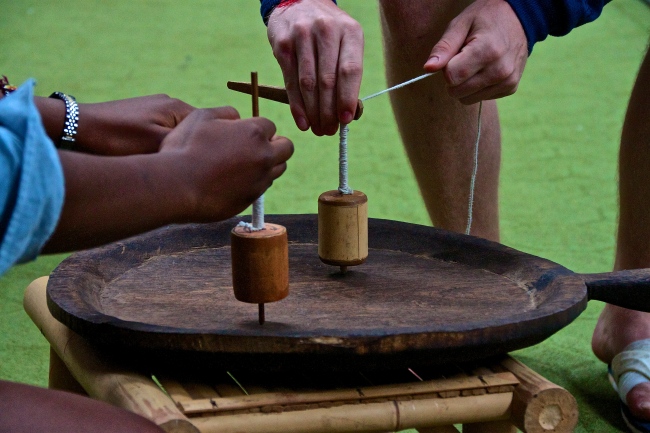 After we finished being 8 year olds we travelled to the Krung Sri River Hotel, where we had dinner on a boat that took us around what used to be the Ancient Kingdom of Ayutthaya. On the Sunday we checked out of Krungsri and visited what can only be described as…more temples.

I have never felt so uncomfortable from the aura of a place. The people, the architecture, the entire infrastructure of Wat Dhammakaya gave me the heebie-jeebies. 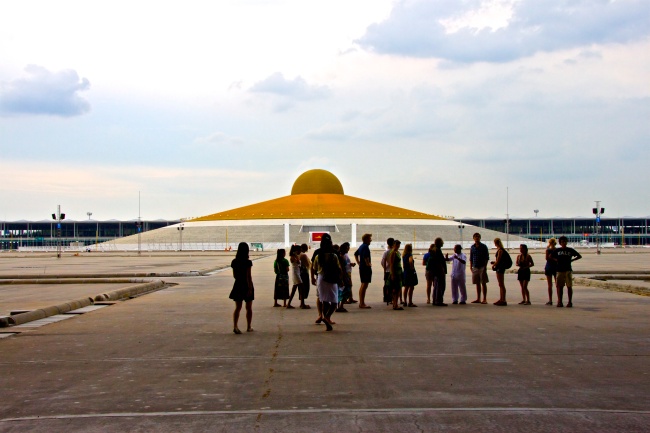 There were signs saying ‘If you pass beyond this point you will not return’. It was surreal, it was a cult. The followers of the religion (Buddhism) were all residents on the premises (It’s incredibly big…) and they all wore white and simultaneously bowed as we passed, as if they were automated robots. We were then taught how to meditate, in which I was afraid he was going to brainwash us all, like his other victims in white. After visiting the many weird parts of this business (all the guide did was talk about money) we departed to Hell’s Asshole, Bangkok.

We checked into the nicest hotel of our time in Thailand. The food at this place was AMAZING, there was so much variety, and there was also a beautifully excessive amount of Sushi.

As the food was so exceptional Adanna and I were the last people of our group who were still eating; we were just on our Ice Cream when we realised all of the group had gone to the meeting with Archen, whom was giving a talk on his life-story. We lapped p the ice-cream and joined them for the meeting, which hadn’t started as they were waiting for us! How embarrassing! My stomach, however, was content! We listened to the wonderful Thai gentleman talk of his life which was incredibly interesting and it was an honour that he shared it with us all.

The following day we were to depart homeward bound to Singapore, but we first visited the Royal Grand Palace and Emerald Buddha Temple. They supposedly had regulations for wearing trousers as to cover all skin, but I sauntered in with shorts! =D!

After getting lost, a few…thousand times with Maggie and Olga, we eventually returned to the entrance (meeting with Ning on the way!) to find that we were the last people to arrive back (I was always part of the last group, what does that say about me eh?).

We then got to the airport and flew to Changi Airport, Singapore. I shall blog my last two weeks in Singapore when I next have time!

View all posts by Max Gibson